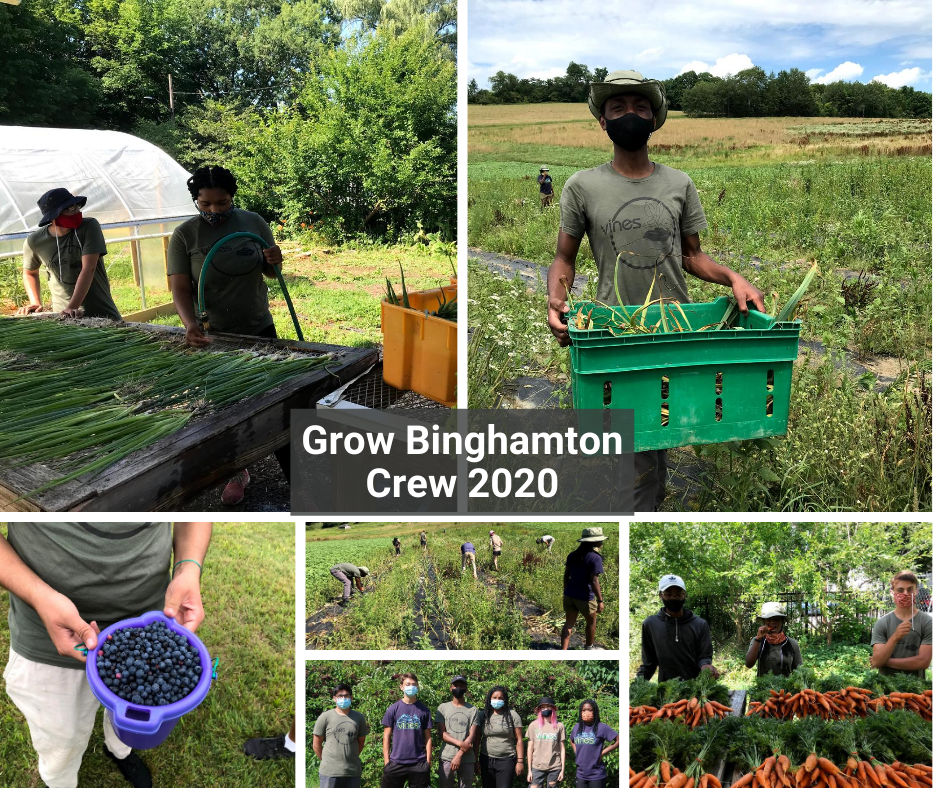 Two words that Grow Binghamton crew member Kia would use to describe her summer with VINES are different and smooth. “Different because we usually have a bigger group, now there are less of us and it’s smooth because everyone is returning so we already know what to do.”

As with all VINES programming the Grow Binghamton Youth Program had to adapt to the world we’re living in this year. Just six youth were hired for the crew this year, instead of the usual 25, to ensure the safety and health of everyone in the program. As Kia pointed out, all youth hired had participated previously in the program so there was less basic training involved allowing for leadership skills to be honed this season.

The size also contributed to a sense of closeness for the crew. “There are times we just have open conversations,” Crew Leader Tayvia said, “and we trust each other when we are talking.” Crew member Robert echoed the sentiment saying that not only did he feel closer to his peers but that he got to know VINES staff better than he had in previous years.

Over the course of the six-week program the crew not only grew and harvested shares for 65 Urban Farm Share members they also visited Shared Roots Farm to harvest garlic and Bleuet Hill Farm for blueberry picking. They had a myriad of guest speakers share information about everything from composting with Cornell Cooperative Extension to financial literacy with SEED Planning Group. As well, they worked with the Broome Community Land Trust to interview local residents about their experiences with housing.

“We’re talking about the housing crisis in Binghamton and how a lot of people don’t have access to housing,” Tayvia told us. Through their work with the Broome Community Land Trust she says they learned “how housing can affect what kind of foods you eat, your education, transportation, and policing in your neighborhood. We are trying to interview people around town to see how they experience housing and tie it all together so that everyone knows what the issues are. It’s really impactful,” she said.

To say this crew worked hard is an understatement, and they all knew that coming in. “I was worried that when I got here, since there are less of us, we would be doing more work – that it would be hot and we’d have the masks to wear and it wouldn’t be fun – just grueling work. Then I got here and it was not like that. It was work but we got it done really fast, much more fast than I expected it to be. It’s because all of us communicate really well with each other and it’s just fun,” said crew member Yaseen. He wasn’t the only one. It was a sentiment the entire crew shared. They all thought the season was going to be tough, yet they applied and decided to be a part of the program anyway. “With less of us we have to do more work to make up for the other youth that weren’t here but we stayed on task and got things done,” said Ish.

2019 was Ish’s first year as a crew member with Grow Binghamton. “Before VINES I was never into my community, I never thought about it,” he said, “But after working with VINES I started caring about it; seeing how VINES affected everyone in the community.”

When the Grow Binghamton season ends there’s generally a sense of sadness within the VINES staff. Not only do we miss having hard working, extremely dedicated young people working with us – we miss their energy. This year, thankfully, we won’t be missing them for long! September 21st brings the start of the Grow Binghamton Academic Year program. You’ll have to stay tuned for more stories on that work!